Near Death Experiences: Proof Of Life After Death The advice that the White Queen gave to young Alice in Lewis Carroll’s Through the Looking-Glass might be some of the best to offer non-believers and skeptics that question the credibility of near-death experiences (NDE). When Alice protests, “One can’t believe impossible things,” the White Queen famously retorts, “I daresay you haven’t had much practice. When I was your age, I always did it for half-an-hour a day. Why, sometimes I believed as many as six impossible things before breakfast.”

The majority of physicians and clinical researchers in the medical community continue to consider NDEs as impossible and merely pure fantasies generated by a surge of electrical activity as a dying brain runs out of oxygen. However, according to a Gallup poll, the 8 million Americans whose transcendental NDEs freed their consciousness to leave the body and enter into a wondrous reality that exists completely free of physicality, believe them to be real, meaningful and life-changing experiences.

Recently, the renowned NDE narratives of Anita Moorjani, author of Dying to Be Me: My Journey from Cancer to Near Death, to True Healing, and Dr. Eben Alexander, author of Proof of Heaven: A Neurosurgeon’s Journey into the Afterlife, have sparked fresh public interest in NDEs, a word coined by Raymond Moody, Ph.D., in his 1975 classic, Life After Life. Moody, a psychiatrist and professor of philosophy who has spent nearly 50 years investigating what happens when people die, has interviewed thousands of individuals that have personally experienced an NDE.

“Over the past 20 years there have been enormous strides in resuscitation technology. Defibrillators and public access defibrillation programs, as well as cardiopulmonary resuscitation, are major factors that allow modern medicine to bring people back from a state that 100 years ago would have been labeled death,” observes Moody.

Through his research, he has identified numerous common elements that occur in NDEs—an out-of-body experience, the sensation of traveling through a tunnel, encountering a bright light (usually interpreted as God, Jesus or an angel), communicating with deceased relatives, feeling emotions such as profound peace, well-being and love, plus a flood of knowledge about life and the nature of the universe. Perhaps the most significant element he reports is the supremely conscious and superbly blissful state that exists beyond both limitations of the senses and intellect and the confines of space and time—the pure conscious form of each one’s truly real Self.

Rushed to the hospital in a coma, Moorjani, whose body had been devoured for four years by cancer of the lymphatic system, describes the real self that she discovered during her NDE. “There I was, without my body or any physical traits, yet my pure essence continued to exist. It was not a reduced element of my whole self; in fact, it felt far greater and more intense and expansive than my physical being.

“I felt eternal, as if I’d always existed and always would, without a beginning or end. I was filled with the knowledge that I was simply magnificent,” explains Moorjani, whose cancer completely disappeared within five weeks after her release from the hospital.

“Not only did I come back with a clean slate, I brought back one of my biggest lessons—to love myself and be an instrument of love. I also returned to life here with a sense of purpose—to fearlessly be as authentically me as I can be. This means,” she clarifies, “that in whatever I do, I am acting from my sense of passion and the sheer joy of doing it.”

During Alexander’s seven-day coma in a hospital, brought about by antibiotic-resistant E. coli meningitis that attacked his brain, he left his mortal identity behind. “My brain wasn’t working at all,” he relates. “My entire neo-cortex, the part that makes us human, was entirely shut down. I had no language, emotions, logic or memories of who I was. Such an empty slate granted me full access to the true cosmic being that I am, that we all are,” says Alexander. He further recalls that as his NDE unfolded, it occurred to him that he was being granted a grand overview of the invisible side of existence.

He also had a lovely ethereal companion that floated along on a butterfly wing, telepathically teaching him to accept the universal truth that, “You are eternally loved and cherished, you have nothing to fear, and there is nothing you can do wrong.”

“If I had to boil the whole message down to just one word, it would be Love—the incomprehensibly glorious truth of truths that lives and breathes at the core of everything that exists or will ever exist. No remotely accurate understanding of who we are and what we are can be achieved by anyone who does not know it and embody it in all their actions,” Alexander now understands.

Prior to his life-threatening illness, this neurosurgeon’s sophisticated medical training had led him to dismiss the possibility of NDEs. Today, he works at returning to his NDE state of oneness and unconditional love by using meditation and sacred acoustics, as well as quantum mechanics, to explore the nature of consciousness and higher brain function.

Like Moody, Alexander studies the ancient Greek philosophers Parmenides, Pythagoras and Plato, who took the notion of an afterlife seriously and questioned “what” survives bodily death. Alexander’s consequent nonprofit organization, Eternea, fosters cooperation between science and spirituality by sponsoring research and education about spiritually transformative experiences and holistic consciousness beyond conventional definitions. “I had to learn a whole lot more about consciousness than I had to know about neuroscience,” quips Alexander, who now believes that the brain blocks access to knowledge of higher worlds. “We need to accept—at least hypothetically—that the brain itself doesn’t produce consciousness. That it is, instead, a kind of reducing valve or filter that dumbs down consciousness for the duration of our human experience.

“Neuroscience can’t give you the first sentence about how the physical brain creates consciousness,” he states, while many are finding how science and spirituality strengthen each other

At age 37, a blood vessel exploded in the left hemisphere of Jill Bolte Taylor’s brain. A Ph.D. Harvard-trained scientist specializing in anatomy of the brain, she was fascinated to observe the breakdown of her brain-related functions.

As described in her book, My Stroke of Insight: A Brain Scientist’s Personal Journey, she became the witness to her stroke, which initially left her unable to talk, walk, read, write or remember anything prior to that occurrence.

As her left brain shut down, Taylor lost her ability to process all language; with her mind suspended in newfound silence, she experienced an unprecedented sense of deep peace. She also experienced an inability to visually distinguish edges and boundaries between herself and the outer world. Absent conventional orientation, “I could actually see that my skin was not my physical boundary.

“In touch with our wholeness, illness can’t remain—in ourselves, others or the planet.”
~Anita Moorjani

“As a result of such a glorious state of blissful realization that I am—as we all are—connected to everything and everyone around us, I no longer see myself as a single, solid entity, separate from other human beings,” advises Taylor. “Although my left mind still thinks of me as a fragile individual, capable of losing my life, my right mind realizes the essence of my being as eternal life.” She now understands that she is part of the cosmic flow of energy, which she characterizes as a tranquil sea of euphoria.

In The Hidden Face of God: Science Reveals the Ultimate Truth, author Gerald L. Schroeder, Ph.D., suggests that each of us is a part of the universe seeking and finding itself. Could it be that without the mental filter and self-limiting beliefs, we are free to consciously know our higher state of wholeness and the truth of our magnificence?

Upwards of 8 million people that have experienced their own NDE are trending the world toward a tipping point into the comforting awareness that anything is possible.

Linda Sechrist is a senior staff writer for Natural Awakenings. Visit ItsAllAboutWe.com for the recorded interviews. 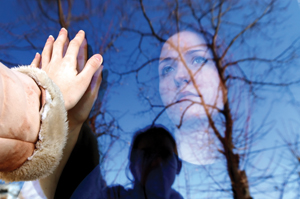 Asked why she thought she had cancer, Anita Moorjani, author of Dying to Be Me, sums up her answer in one word: Fear. “I was killing myself, and cancer saved me,” says Moorjani, whose book documents her near-death experience (NDE) and the higher realm she encountered when her body shut down. Allowed to identify with her true magnificence, undistorted by the fear generated by her own lifelong self-judgment, self-criticism, worry and lack of self-forgiveness, she returned with a vital, heartfelt message.

“Everyone is an amazing, magnificent being, with great capacity for health, happiness and joy. Although we’ve been conditioned to believe that we need to pursue success and learn to improve ourselves to be happy, such steps are unnecessary, because we already are all we are trying to attain,” she says.

“I’d spent a lifetime feeling inadequate, beating myself up for not meeting my own expectations,” she continues. Through the clarity of dwelling in the NDE realm, she understood that the cancer wasn’t a punishment for anything. “It was just my own energy manifesting as cancer, because my fears weren’t allowing me to express myself as the magnificent force I was meant to be,” advises Moorjani.

“I’ve become focused on seeing the perfection of life in this moment.”

She hopes that her presentations to medical professionals and public speaking will influence how the health profession views cancer and other diseases and illnesses. “Treatment needs to be about more than medicine, because so much of disease has to do with our emotions,” she imparts, “especially the ones we direct toward ourselves.”

Through this life-enhancing experience, Moorjani came to understand why she owes it to herself, everyone she meets and life itself to always express her own unique essence. “Trying to be anything or anyone else doesn’t make me better—it just deprives me of my true self and keeps me from interacting authentically with others,” she explains.

Moorjani now knows that all life in the universe is one and our core is love. “I was overwhelmed by the realization that God isn’t a being, but a state of being… and I am that state of being… pure consciousness.”