Spark Up Your Love Life Underlying health issues aside, a hectic schedule packed with work deadlines, kids’ sporting events and household chores can leave little time for intimacy. Letting that pattern go on too long can become a problem. “There’s a use-it-or-lose-it phenomenon that occurs,” says Dr. Anita Clayton, a University of Virginia psychiatry professor, neurologist and author of Satisfaction: Women, Sex, and the Quest for Intimacy.

Despite what hyper-seductive female media stereotypes suggest we believe, in the real world, 39 percent of women feel they lack sex drive, and nearly half experience some kind of sexual dissatisfaction, according to a survey of 32,000 women published in the journal Obstetrics & Gynecology. About one in eight women are significantly distressed about it. “The truth is, many of us don’t have great sex lives,” confirms Clayton.

Sprout Pharmaceuticals introduced Addyi, aka filbanserin, last fall; the first prescription drug to address low libido in women. Some heralded the controversial medication as “the little pink pill,” seeing it as the female version of males’ blue Viagra pill, which a half-million men purchased in its first month on the market in 1998. Yet several months after its launch, only about 1,000 women had tried Addyi and many doctors declined to prescribe it, due to its lack of widespread efficacy and possible adverse side effects, including low blood pressure and fainting when combined with alcohol.

“This is a complex problem that requires a complex solution,” says Honolulu-based naturopathic physician Laurie Steelsmith, author of Great Sex Naturally: Every Woman’s Guide to Enhancing Her Sexuality Through the Secrets of Natural Medicine. “For most women, drugs are not the answer.” She notes that for men, boosting libido is largely a matter of boosting circulation and blood flow to the penis. But for women, desire for lovemaking stems from an interplay of emotional, interpersonal, hormonal and anatomical drivers that make lack of desire harder to “treat”.

The truth is that many simple, effective, non-drug approaches exist. As Boulder, Colorado, marriage therapist Michele Weiner Davis puts it, “There’s no reason why a woman wanting a more robust sex life cannot have one.”

The number one culprit for low libido in women is subpar physical health, says Steelsmith. “To be capable of fully enjoying pleasure, you need a healthy body.” Carrying excess weight can both erode self-esteem and lead to reductions in a woman’s natural circulating testosterone, a critical hormone that helps ignite pleasure circuits in the female brain and increase sensitivity in the clitoris. Being underweight can result in fatigue and low sexual energy, diminished production of excitatory brain chemicals and low levels of estrogen, key for keeping a woman moist.

Meanwhile, Steelsmith explains, excess stress can prompt the body to “steal” from libido-boosting hormones like progesterone in order to make more of the stress-hormone cortisol. High blood sugar can drive down testosterone, while high cholesterol can clog pelvic blood vessels, dulling sensation.

Depression, diabetes and thyroid disorders are other major libido killers, says Clayton. “If you treat them effectively, you may see big improvements.”

Exercise—another circulation booster—is also key. Do it before a scheduled hot date for even better results. One 2014 study of 52 women found that those that worked out prior to an anticipated romantic encounter had significantly increased sexual desire.

Many women avoid sexual encounters for fear of sparking a urinary tract or vaginal infection. This becomes more common after age 40, as estrogen wanes and pelvic tissue thins and dries, leaving it more vulnerable to microbial invaders. Because semen is alkaline, it changes a woman’s vaginal pH, allowing unfriendly bacteria to thrive, says Steelsmith.

Her advice: Always go to the bathroom and urinate after intercourse, and use natural lubricants, like vitamin E. For some women, she also recommends low-dose, prescription estrogen cream or suppositories. If an infection occurs, try to treat it naturally, avoiding antibiotics, which can spark yeast overgrowth. Instead, Steelsmith recommends using tea tree oil, goldenseal, or probiotic douches or suppositories, available online and at health food stores.

Kegel exercises are a famous aid, involving clamping down as if interrupting urine flow, before releasing and repeating. This not only help fends off urinary incontinence and infection, it also strengthens and firms pelvic muscles, rendering enhanced enjoyment for both partners.

Research has shown that over time, frequent lovemaking actually 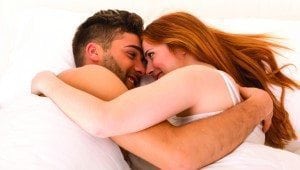 A sexless relationship can also be emotionally devastating for the person, often the male, that wants more contact, says Weiner Davis, author of The Sex-Starved Marriage: Boosting Your Marriage Libido. “For the spouse yearning for touch, it is a huge deal,” she says. “It’s about feeling wanted, attractive and loved.” In her practice, she often sees couples that are mismatched in how they wish to demonstrate and receive love. Often, the woman wants to feel close emotionally before she can feel close physically. For the man, physical intimacy is a conduit for opening up emotionally. When both keep waiting to get what they want, the relationship suffers.

She counsels couples to deliberately make time to address both partners’ needs. Schedule a long walk or intimate dinner to talk over feelings; also schedule sex. “Some people say, ‘Oh, but that’s not spontaneous enough,’” says Weiner Davis. “But even if you put it on the calendar, what you do with that time can still be spontaneous and playful.”

While most women assume that they need to be in the mood first, research by University of British Columbia Psychiatrist Rosemary Basson suggests that in some women, desire only comes after physical arousal, especially by a loving partner that takes the time to meet her needs. “I wish I had a dollar for each time someone said to me, ‘I’m not in the mood, but once I get into it, I surprise myself, because I have a really good time,’” says Weiner Davis. She’s not advising women to make love when they really don’t want to, but rather to be open to it even when the circumstances aren’t ideal. “A lot of women feel like the house has to be clean, with the kids asleep and free of distracting noises,” she says. “Sometimes, just do it.”

Clayton points out that while 42 percent of women experience either low sex drive or satisfaction, fewer than 12 percent are really bothered by it. “Some women experience great grief and loss about this. They say, ‘It used to be a part of my life and now it’s gone.’” For some in this subset that are unable to find relief via lifestyle changes, she would recommend Addyi, said to boost desire by changing brain chemicals. On the other hand, many women don’t need to take any action at all. “If someone has low sex drive and it doesn’t matter to them or their partner, it’s not a problem.”

That said, the benefits of attending to an affectionate, healthy sex life can go far beyond the bedroom, improving overall health and strengthening relationships, notes Steelsmith. Sex burns calories, increases circulation, releases calming and painkilling hormones like prolactin and prompts production of the “bonding hormones” vasopressin and oxytocin.

“When you are in a loving relationship and you express that love through your body, physiological changes occur that can help you bond more deeply with your partner,” she says. “The more you make love, the more love you make.”
Lisa Marshall is a freelance health writer in Boulder, CO. Connect at LisaAnnMarshall.com.

Birth Control Pills: Oral contraceptives can boost levels of sex hormone-binding globulin, which attaches to desire-promoting testosterone, making it harder for the body to access it.

Smoking: It impairs circulation to genitals.

L-arginine: Boosts blood flow to sexual organs. Can be taken in supplement form or applied topically.

Phenylethylamine: Sometimes referred to as the “romance chemical”, this stimulant and mood elevator is naturally released in the brain when we have an orgasm, exercise or eat chocolate; also available in supplement form.

Maca: A Peruvian root used for centuries in that country to promote sexual energy, Maca is said to boost the production of libido-boosting hormones.
Source: Laurie Steelsmith, ND

Thanks for reading! Please leave us a comment, and share this page with your friends!
Lisa Marshall Lisa Marshall is a freelance writer near Boulder, CO and is a regular contributor to Natural Awakenings.
Tantra, Tantra