Traveling can be tricky for those trying to eat a plant-based diet, especially on long stretches of highway. More than 33 percent of Americans, or 100 million-plus people, are eating vegan/vegetarian meals more often, even if they do not adhere to a strict plant-based lifestyle, concluded a 2011 Harris Interactive study commissioned by the Vegetarian Resource Group. Here is what the discerning traveler can do when hunger strikes.

Start by looking for vegan pit stops before you go. Identify a plant-friendly restaurant group, such as Dr. Andrew Weil’s True Food Kitchen (now in 12 states), and then Google for their locations. Smartphone apps such as Finding Vegan and Happy Cow help point the way to vegan-friendly restaurants around the world.

This month, Natural Awakenings asked three savvy travelers how they manage plant-based eating wherever they go.

For Dustin Harder, eating well on the road is a matter of research and preparation. He is the New York City-based chef/host of the online program The Vegan Roadie, with 100 U.S. restaurant visits and counting and now seeking crowdfunding for its third season, set in Italy. Harder has learned to investigate his dining options ahead of time, and always packs a travel-size, high-speed blender, lots of trail mix and his favorite condiments of sriracha (bottled hot sauce) and nutritional yeast.

“You can locate great vegan restaurants in surprising places if you search online before you travel,” he says, listing Viva Vegeria and La Botanica, in San Antonio, Texas, and The Red Fern, in Rochester, New York, among his finds. Where vegan restaurants are scarce, he turns to plant-based options at Chipotle Mexican Grill and Panera Bread. His DIY hotel-room cuisine favorites are a Hotel Smoothie, Banushi (banana sushi) and Pizzadilla, a cross between a pizza and a quesadilla, “cooked” in aluminum foil using a hotel iron and ironing board.

Matt Frazier, a runner and co-author of the No Meat Athlete Cookbook, recently went on the road for a self-funded book tour. Not only had he left his high-powered blender back home with his family in Asheville, North Carolina, he was on a tight budget. “The trick that has helped me not just survive, but thrive on the road is eating fresher, more whole and more raw,” he says. He recommends filling up on kale, broccoli, cauliflower, cabbage, nuts and seeds, berries, beans, onions and mushrooms.

Lindsay S. Nixon, author of The Happy Herbivore Guide to Plant-Based Living and related cookbooks, has traveled from her home in Los Angeles across the country and around the world, finding plant-based foods wherever she goes. “Almost every city has a Thai or Italian restaurant where you should be able to find something on the menu or adapt a dish to stick with plants,” she says. “You might have to get a little creative. I once asked for salsa and a plain, baked potato; not a bad combo, as it turns out.”

Wherever we find ourselves, we can still find healthy ways to eat. 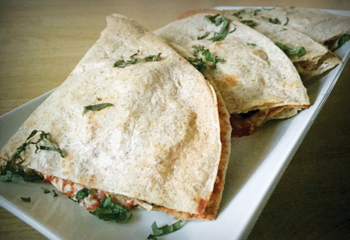 While the iron is preheating, place tortilla on a square of aluminum foil large enough to enclose the tortilla. Sprinkle half the cheese on one half of the tortilla, top with peppers and onions, spoon over the marinara and sprinkle with the remaining cheese. Fold the other half over the toppings, and then fold the foil over the entire Pizzadilla, completely closing the edges of the foil. 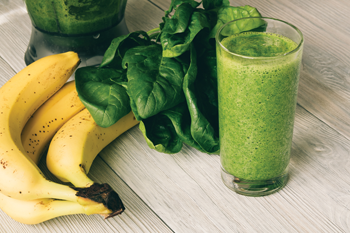 Put the water, greens and banana in a high-speed, travel-sized blender and blend until smooth. 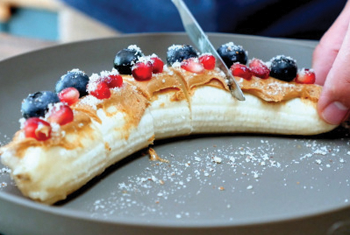 Peel the banana. Spread with a layer of nut butter to look like a sushi roll.

Place blueberries in a line down the middle lengthwise, about an inch apart.

Sprinkle with pomegranate seeds or strawberry slivers and top with raw nut crumble. Slice into pieces the size of sushi roll pieces.